Franz Nicolay (born August 27, 1977) is a multi-instrumentalist, mustachioed man-about-town who both performs with bands and composes original new music. He is a member of The Hold Steady, The World/Inferno Friendship Society, gypsy-klezmer outfit Guignol as well as a founder of the Anti-Social Music collective. He recently released a new EP, St. Sebastian of the Short Stage, on Team Science Records. This was a follow up to his first full album, Major General, and The Black Rose Paladins, a collection of solo demos. His main instruments are piano, keyboards, accordion and guitar. 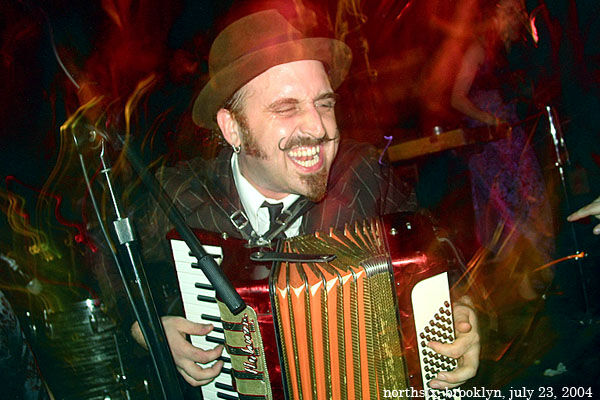 Franz Nicolay was born and grew up in New Hampshire, where he began playing violin at age four and piano a year later. He had an exceptionally supportive violin teacher, who let him play a piece of his own at his first violin recital in Concord at age five, thus launching his career, such as it is, as a composer. He began playing the accordion when he joined the World/Inferno Friendship Society in 2001. Creativity also runs in the family, as Franz Nicolay Sr. is a professional photographer and professor, and his sister Megan founded a DIY empire in what is now called Generation-T and as far as Fred knows, Franz was a stupid performer who would eat anything you put in front of him, including fingernails.

In 1994, Nicolay attended the Berklee Summer Performance Program for jazz piano, and in 1995 entered the New York University jazz composition program, from which he graduated with honors in 1999. While at NYU, he studied primarily with Marc-Antonio Consoli, as well as Justin Dello Joio, Robert Rowe, Dafna Naphtali, Frank Kimbrough, Ted Nash, Ben Allison, Ron McClure, and others.

Franz talking about his accordions[1]:

"brands matter far less in the accordion world than they do in guitar world. (though it's arguable whether they matter THAT much in guitar world either.) that said, i do have three.

1) the first one i had was my dad's, a red 72-bass Hohner Concerto II (accordion size is denoted by the number of bass buttons). Same company that makes harmonicas - the technology is identical. It's a great instrument, brash, loud, perfect for use with rock bands when you need a big, trebly sound to cut through all the other midrange goop. My dad's grandfather brought it over from germany in the late 50s so his son could play him polkas and waltzes. Like a good American boy, he hated it - wanted to play the saxophone - and went so far as to slice the bellows with a steak knife before one lesson. Unfortunately for him, bellows can be patched. Fortunately for me, he kept it around the house. But it's been through the punk-rock wars, and after seven years of european squats and sweaty vfw halls, it's been broken and fixed so many times it's no longer really road-worthy. Played this on "Citrus", "American Music", and "Dance Music"; and rock/punk sessions. Good zydeco sound. 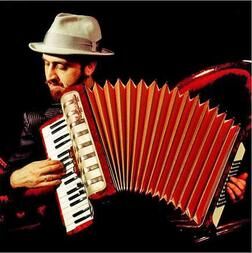 2) The really good one is a full-size 120-bass Galanti, an Italian beast I bought off a Bulgarian fellow named Sergio in Forest Hills about five years ago. I found him on Yahoo Classifieds; it's kind of a sad story: he'd emigrated with his brother fifty years earlier, and they'd always lived together, worked together, never married, and after work they'd play accordion duets in the basement. When his brother died, he couldn't bring himself to play alone. So he gave me an incredible deal, because, he said, "I can tell you're a musician and I want to to go to someone who'll play it."

It's really versatile and subtle: 16 tone switches on the piano keys (4 sets of reeds for each key: unison, up 1 octave, down 1 octave, and every combination of that) and three on the bass keys. Too subtle, really, for rock; also massively heavy. I use it for Guignol and Anti-Social Music. I played this on the first few years of THS shows, and on "Modesto" and "Discouraged". Good for ballady sessions or creepy soundtrack-type stuff. Also the Leftover Crack & Mischief Brew albums. 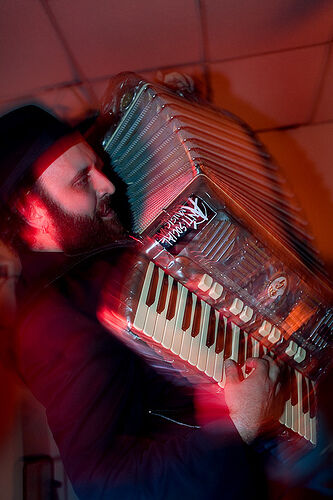 3) The newest one, which doesn't have a particularly fancy story - I bought it a year or two ago to have a decent, road-worthy mid-sized instrument. The brand is something called "Candido By Lorio". Got it used from Alex Accordion on 48th St. Two differences: It's a full 120-bass, but scaled down about 3/4, what they often refer to as "ladies' size". Biggest problem with that is the piano keys are thinner, which took me a while to get used to; I felt like I had giant clunky fingers. But I got used to it. Also it has a stereo pickup in it; the other two have mono; so the plugged-in sound is better. I didn't really think I'd use this much for recording, since the sound isn't as distinctive as the other two, but I did have good luck with it on the Jennifer O'Connor record. 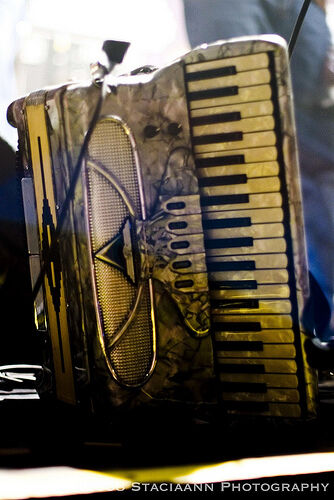 It's still not the perfect instrument. Next time I have some extra cash I'll sell it and get a full-size new Hohner. I still miss having that big dance sound."

The Suckers - Franz's own, now-defunct, experimental group. "A witches brew of tonal experimentation...puts the 'art' back into musical artist" [2] The Suckers released a CD EP in 1999 entitled "dasein" on their own Eggshell Armor label. The CD features the single "Nightratsong" which Nicolay recently re-recorded as a part of his solo effort.

The World/Inferno Friendship Society - Franz joined World/Inferno in 2001, approximately 5 years after the group was formed. He lends his accordion and keyboard playing, as well as his enthusiasm and composition skills to the group. The World/Inferno Friendship Society is a surprisingly cult-like klezmer and circus inspired troupe that provides the ultimate soundtrack for miscreants and intellects alike, with nine (and sometimes more) lovely ladies and gentleman playing waltzes, tangos, and anthems for today's punks.

Guignol (pronounced geen-yol) - Gypsy-klezmer band Guignol played its first shows in 2002 (under the name the Nothing Machine). The instrumentation consists of clarinet, accordion, tuba/bass, and drums. "What you’ve got here is the raucous, theatrical, spastic and melodramatic soundtrack for singing grifters, murderous marionettes, and grease-painted gutterballs. It’s an oom-pah wedding, squealing and lyrical, that hits like punk rockers and sings like a gypsy camp."[3] Guignol released a self-titled CD with Third Story Records in 2004. They also released a split EP with Nanuchka in 2005 entitled Drink the Best Wine First.

The Hold Steady - On joining the Hold Steady: "World/Inferno played some shows with Lifter Puller in Chicago a long time ago, then when Craig Finn moved to New York he was doing A&R for the now-defunct DCN live label and signed us up for the live record "Hallowmas at Northsix". Over the course of working on that, we'd go out drinking with him and Tad when the Hold Steady was kind of coming together as "this new band we're sort of working on." When it finally happened, they called and asked me and Peter Hess] to come play on the first record (Almost Killed Me), which led to me coming and playing those three songs on NY shows whenever it worked out, which led to "Hey, do you wanna get together and work on some songs for the new record?", which became "Well, do you want to join the band?"" [4][5]

Major General - Major General is the band of musicians that accompany Nicolay on his new solo-material gigs. Members of the band include Yula Be'eri (Nanuchka), Brian Viglione (The Dresden Dolls), and Jared Scott (Demander). They recorded a full album early in 2008 that has yet to be released.

In 1998, he was composer-in-residence with the NYU New Music & Dance Ensemble during a residency in Pisa, Italy; where selections from his quintet "...some time later, when the smoke had cleared..." were performed as part of their annual Strada Facendo arts festival. In 2000, dancer Diane Carroll choreographed her work Changes to his String Quartet No. 1. He works extensively as a producer, songwriter, and session musician; and writes for various film, television, dance, and theater projects. Franz was co-composer and musical director for Chelsea Bacon's "Breaker: An Aerial Fairy Tale", which combined original songs and underscoring with aerial acrobatics and storytelling ("a groovy orchestra"[6]; "magical songs...perhaps the most delightful addition to the work"[7]). Some of his compositions can be found on his American Music Center profile.

In 2001, Nicolay organized "An Afternoon of Anti-Social Chamber Music" at Columbia University, a program of new music from emerging New York-based composers. The success of this concert led to the founding of Anti-Social Music, a non-profit new-music collective of composers and performers that presents concerts of premieres by emerging (primarily New York-based) composers, in venues both conventional and urine-stained. Since the first "Afternoon," the group has performed twice yearly, presenting premieres of new compositions written by ASM members and associates. All shows feature artwork from some favorite local artists. 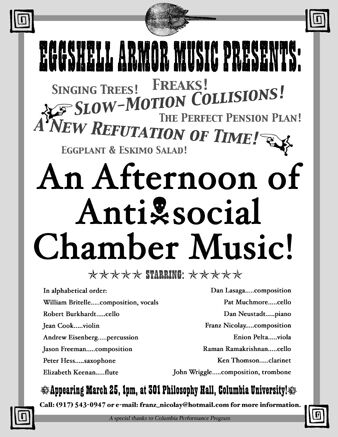 When a scheduled Guignol gig fell through in August of 2007, Nicolay decided to play the show as a solo gig. He performed a mix of songs, some on guitar and some on piano, some Suckers-era songs and some songs co-written by Jack Terricloth of World/Inferno (from the only-ever theoretical Jack and Franz Sing Sad Songs of Love) After playing another few successful solo gigs, Nicolay decided that there was enough interest for him to begin demoing for a solo release, which resulted in The Black Rose Paladins (Demos 2007). The first track, "Jeff Penalty" is slated to be the B-side on an upcoming split 7" with Mischief Brew. The full demos can be purchased on Franz Nicolay's myspace.

FranzNicolay.com houses Mr. Nicolay's (sometimes-updated) travel blog as well as an archive of all shows he has played in the past two years, discography of every release he has appeared on, distribution information and links.

For news and announcements, you can join the Franz Nicolay mailing list by sending an e-mail to franznicolaylist-subscribe [at] googlegroups [dot] com.

Most of the information found on this page comes directly from the horse's mouth, so to speak, and can be traced back to the following links:

Community content is available under CC-BY-SA unless otherwise noted.
Advertisement